Repertory Dance Theatre believes that all peoples, their cultures, and their art contribute to the meaning and understanding of our humanity and should be honored and celebrated.

RDT firmly stands against racism in all forms. We, as a Company, denounce racism, bigotry, and intolerance in our state and across the nation. We are committed to learning, growing, and listening as we work toward a more equitable world for all.

RDT stands in solidarity with our communities of color. We stand for equity and inclusion and we stand against racism. We have a priority to have a company of racially diverse dancers who are skilled ambassadors for the benefit of a racial and culturally diverse society.

Repertory Dance Theatre relishes the diversity of thought and action. Hispanic Heritage Month is an opportunity for this company and all our patrons to reflect on many of the amazing and influential dancers and choreographers of Hispanic heritage in the history of dance.

Repertory Dance Theatre believes that each of us has a unique “sense of place” that can be explored through movement and art.

RDT and many people, in the Southwest and beyond, agree that our lands and our waters have a sacred character to them. They are our sustenance. They literally ground us in the world, and they call to a deep and abiding place within us; the notion of “home.”

RDT’s 2018 commission, “Dancing the Bears Ears” is linked to the Bears Ears National Monument in southeastern Utah. The monument is 1.35 million acres in size and gets its name from two twin 9,000-foot buttes that are visible from most of the Four Corners Region and mark a remote and spectacular landscape.

In 2016, RDT petitioned the NEA for funding to enable us to explore the region and to create a dance in response to its high mountain peaks; deep canyons; long, broken mesas; astounding arches, and stately red-rock cliffs. RDT commissioned Zvi Gotheiner to create this work and he agreed to bring his company members on the journey alongside RDT.

The two dance companies were eager to experience firsthand the energy and spirit of Bears Ears and we embarked on a mission to gather information and inspiration for new work. As artists, we wanted to allow the history, the sights, and sounds of a landscape to literally “move us.” We formed a partnership with the Utah Diné Bikéyah (a non-profit organization that works toward the healing of people and the Earth by supporting indigenous communities in protecting their culturally significant ancestral lands), to learn more about this incredible area.

Guided by 3 Diné elders; Ida Yellowman, Mary Benally, and Jonah Yellowman; our group of 18 artists spent a week hiking, exploring, listening, contemplating, and improvising. As we traveled throughout the region, we opened our eyes, hearts, and minds to the breathtaking landscape. We soon realized our sense of time was changing. There was little cell phone coverage and soon everything became an adventure. The dancers gathered daily for improvisation sessions. The things they saw, heard, sensed, and experienced were going to be translated into movement.

Lands within the Bears Ears region are among the most culturally significant in the country. The area is world-renowned for the integrity and abundance of cultural and archaeological resources. The creation of the new Bears Ears National Monument is the culmination of unprecedented work by the people of Utah…conservationists, environmentalists, recreationists, and by five Native American tribes, the Navajo, Hopi, Zuni, Ute, and Ute Mountain tribes. Multiple indigenous cultures have inhabited, crossed, and built civilizations on these lands.

During our time in Bears Ears National Monument, we spent time listening to the concerns of native people who see the area as a place for healing.

Native Elder Regina Lopez-Whiteskunk said, “ Native Americans have always maintained a relationship with the land. The Bears Ears is home to the dwellings of our ancestors, the final resting places of our people, and sacred areas where our people still collect traditional herbs and medicines today. But it is also home to oil and gas and potash. Like so many ancestral lands, the Bears Ears is threatened not only by looters and grave robbers but by mining and oil and gas companies.” We also learned that the animal, the bear, figures prominently in the mythology of nearly every Native American tribe. In most Native cultures, the bear is considered a medicine being with impressive magical powers and plays a major role in many religious ceremonies. Bears are also symbols of strength and wisdom to many Native Americans and are often associated with healing and medicine.

When we returned to Salt Lake City to work on the choreography of the piece, we agreed that this experience had somehow “changed” us. Dancing the Bears Ears is a work filled with our memories, filled with fragments of stories, and laced with the spirit of ancient inhabitants. But mostly, it is a dance about how this incredible landscape affected us, healed us, and brought us into a harmonious place. The dance is a “new ritual” to raise consciousness about the importance of this amazing area. 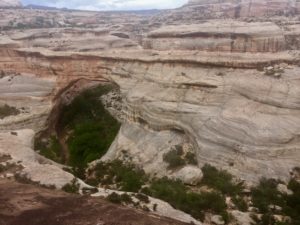 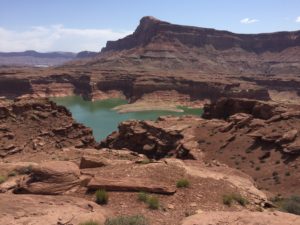 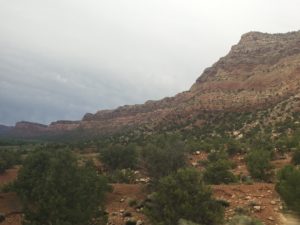 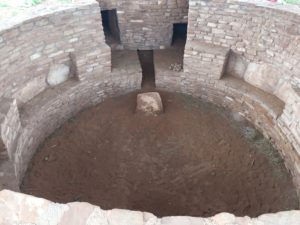 Ida Yellowman (Diné) shares a song with the RDT dancers and ZviDance dancers on the trip to the Procession Panel in Bears Ears National Monument.

A public event featuring history, Native traditions, and envisioning a future through art & story for this living cultural landscape in Bluff, UT on May 11, 2017.

RDT appreciates the generous funding provided by the Utah Legislature and the Utah Board of Education that help make our Arts-in-Education Programs possible in Utah's Public Schools.