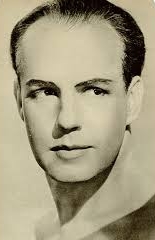 Ted Shawn was born as Edwin Myers Shawn on October 21, 1891, in Kansas City, Missouri, but grew up in Denver. While studying to become a minister, Shawn suffered a bout of diphtheria which left him paralyzed when he was 19. His physician advised him to take up dance as a form of physical therapy. Dancing cured Shawn’s paralysis and spurred him on to leave divinity school and pursue the art of dance as a life-long profession.

While Shawn did not have the ideal body type of a male dancer—he was over six feet tall and weighed 175 lbs.—he achieved some success starting out. His first professional dance experience was with a Metropolitan Opera ballerina as his partner, and he garnered a few fans as part of an exhibition ballroom team. In 1912, he moved to Los Angeles and opened a dance studio. There, he would be instrumental in making one of the first dance motion pictures Dances of the Ages. Soon after, his dancing partner, Norma Gould, embarked with their company of interpretive dancers upon a cross-country tour and reached New York City after 19 performances.

In New York, he met Ruth St. Denis (1878-1968) and married her almost immediately, on August 13, 1914. Their union would set his artistic life in even greater motion as the pair formed the Denishawn studios and dancers. Shawn also served in a stint in the United States Army, first as an enlisted man, then as an officer during World War I, before devoting himself completely to dance.

During the next 15 years, the activities of the couple’s Denishawn company and school changed the course of dance history. It was the first American institution to combine performance and touring with dance curriculum. It was also considered the only dance school to which parents could safely send daughters. Most of today’s modern dancers trace their ancestry to Denishawn. It was Shawn who first recognized Martha Graham’s potential. He was also instrumental in shaping the early careers of Charles Weidman, Doris Humphrey, and Jack Cole. While St. Denis provided most of the creative sparks, Shawn had the business sense to make Denishawn a coast-to-coast success.

Denishawn aimed to demonstrate that modern dance could be a serious art, while maintaining the interest of mass audiences through the use of costume, spectacle and entertainment. Its varied repertory incorporated spiritual exotica in solo, duet and group form, as well as large-scale presentations such as the Dance Pageant of India, Greece, and Egypt (1916). Premiering at this event was the couple’s signature duet, Tillers of the Soil, a stylized rendition of an ancient Egyptian couple harvesting the earth. Shawn contributed to these spectacles but also choreographed nearly 200 of his own works, ranging from the comedicÂ Betty’s Music BoxÂ (1922) to the ethnic Japanese Spear Dance (1919). His infatuation with ancientÂ Greek philosophy and physical ideals led him to create such dances as Death of Adonis (1924), in which Shawn, nude and painted white, embodied a moving classical sculpture.